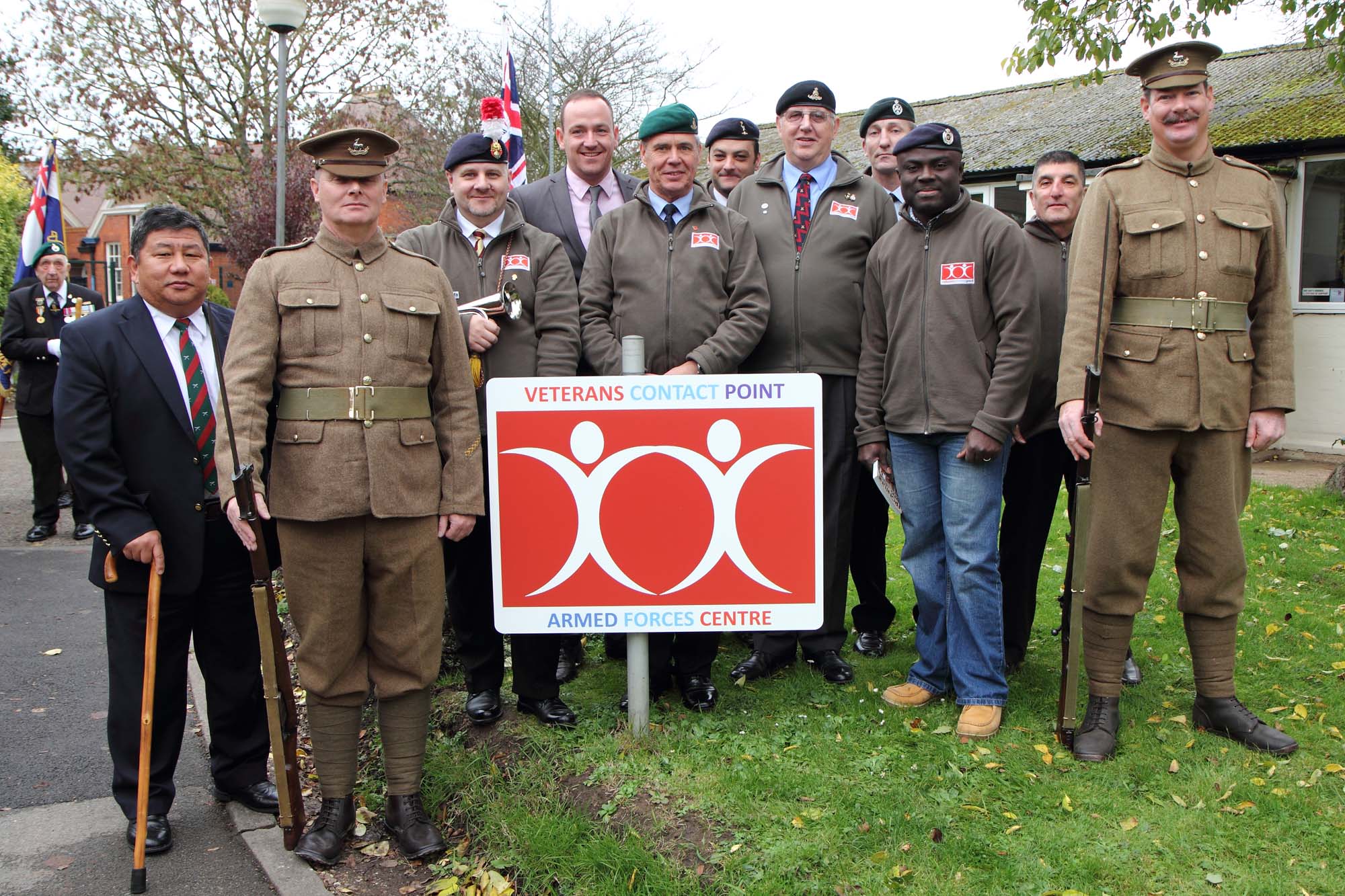 The opening of the new home for the Armed Forces Centre in Nuneaton marked the beginning of a new era in the provision of support for veterans and serving members of the armed forces.

On Friday 15th November, Warwickshire’s Lord Lieutenant, Mr Timothy Cox joined over 100 other dignitaries and guests, including Marcus Jones MP, for the official opening of the Veterans Contact Point Armed Forces Centre which is located at the Horsa Building, on the grounds of Queen Elizabeth School on Bentley Road, Nuneaton.

Ex-service Association Standard Bearers, members of Frontline Living History group, Royal Air Force Air Cadet Drummers from the band of 121 (Nuneaton) Squadron and the flag waving children from Queens C of E Junior School made absolutely sure that the opening of the Warwickshire Veterans Contact Point Armed Forces Centre was an event to remember.

Councillor Izzi Seccombe Leader of Warwickshire County Council also used the occasion to launch the Veterans Health booklet which was produced to help veterans, their families and Health practitioners. This booklet again being supported through funding made available from the Armed Forces Community Covenant. The Veterans Health booklet is available in hard copy or can be downloaded from the Warwickshire County Council website.

The opening celebrations also included veterans, Jesse Owen, Don Jacques, Dave White, VCP lead Len Hardy and other Veterans, who engaged in talks and other activities with the Pupils & Staff of Queens Church of England Junior School. Local Royal Marine Veteran, Jesse Owen shared his own personal history both as a previous pupil at the school and that of this period of Remembrance. Len Hardy stated that the history of people such as Jesse and Don needed to be shared and not lost in time. He also said that the pupils reacted very positively to these warm characters and engaged in all the activities of the day. The school children also experienced WW1 military life through the help of two re-enactment practitioners who also freely gave up their time to come along and teach the youngsters a thing or two about Drill. After their introduction to the joys of ‘Square Bashing’ the youngsters had time for cakes and soft drinks and also took part in a colouring competition which in recognition of the Children in Need celebrations and Pudsey Bear, the 6 pupils judged with the best pictures were given a SSAFA Teddy Bear.

Mr Len Hardy also gave special thanks to the Veterans Contact Point Staff and Volunteers for the support they have provided since this veterans community group started its work in April 2011. The VCP working with its partners, which include The Royal British Legion, SSAFA, ABF/The Soldiers Charity, WCC, Warwickshire Police and Probation, with additional support from Fry Housing and other local community groups, together have helped to support over 600 members of the Veterans Community.

When commenting on the future aspirations of the Armed Forces Centre, Mr Len Hardy said, “We hope to see the new Veterans Contact Point & Armed Forces Centre become the focal point for the local communities and Armed Forces Personnel, a place where their families and dependants can come together, to support the mutual needs of both communities. This morning we have experienced the bond and mutual respect shared between Veterans and the Pupils of Queens School and the young people of the local Cadet Forces, a coming together of the generations which was something to be admired. The act of freely sharing personal stories reinforced by the dignity of those who had been there and experienced living in those times, was and always will be priceless, something that film or history books could not capture.”

Following the opening ceremony Flight Lieutenant Paul Hincks RAFVR(T), of the Nuneaton Air Cadets said, “As well as being the lead for the Veterans Contact Point, Len Hardy is also the Civilian Committee Chairman for our Squadron. As such this connection with the local ex-service community has provided us with a wealth of opportunities to engage with veterans and Armed Forces Community Covenant projects within the local community. Len and his team have worked tirelessly to develop the Veterans Contact Point and make today a reality and we a proud to have been able to be a part of today’s celebrations. One of the key objectives of the Air Cadet Organisation is the development of good citizenship amongst our cadets and to that end we will continue to support both the VCP and the Armed Forces Community Covenant”.

The final plea made by Len was that all of the Armed Forces Communities, those serving and those who have served, their families and dependants, along with the local communities, businesses, councils, statutory bodies and charities, use the newly opened Veterans Contact Point Armed Forces Centre. By doing so, services can be developed and delivered under one roof to help those in need, from housing and work, through to help with welfare and learning.

The Armed Forces Centre, situated in The Horsa Building in Bentley Road Nuneaton, is open from Monday through to Friday, five days per week, between 10:00 and 16:00 hours. No appointment is necessary, so if you are a veteran/member of the Armed Forces Community or someone willing to help or you know someone who needs help, pop in and talk to us. We offer a local service for local people and if it is only a hot drink and a chat, we look forward to seeing you. Our telephone number is: 02476 343793 and email: contactus@veteranscontactpoint.co.uk