Meet Up, Eat Up and Put Your Feet Up 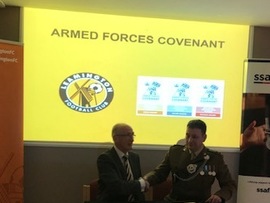 ‘Leamington FC Chairman Jim Scott recently signed the Armed Forces Covenant for the club, pledging to uphold the key principles of the Covenant and support serving personnel and veterans. The Covenant was signed jointly by Lieutenant Colonel Paul Walkley, Commanding Officer of 2nd Battalion Royal Irish Regiment, in a ceremony held at the Club’s Phillips 66 Community Stadium in front of local dignitaries, both serving and former military personnel and invited guests.  The Club are supporting the employment of veterans, offering flexibility to Reservist employees and families of serving personnel and taking part in the Tickets for Troops Initiative. 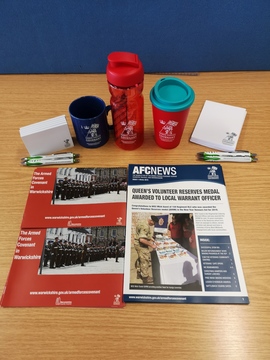 Kineton Station held its annual ‘Health Fayre’ on Monday 25 March.  The stall on the Armed Forces Covenant was very popular and gave Phil Deakin, AFC Worker for Warwickshire County Council, the opportunity of promoting the benefits of the Covenant to both serving personnel and their spouses.  Now, was it Phil’s winning personality or the goodies that were on offer that attracted people to the stall?! If you’ve missed it, serving personnel can still learn about the Covenant here and spouses here.